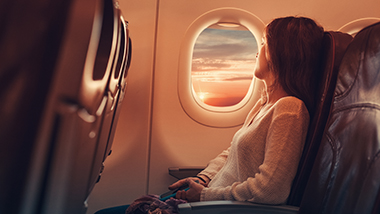 Posted at 05:08h in Expert opinion, Uncategorized by Alex Meyer

As our ability to manage cardiovascular conditions has improved over time, many patients with significant cardiovascular disease travel long distances. This includes patients who have or had cardiac symptoms, cardiac surgery, implantation of cardiac devices or cardiology interventions.

Myocardial ischemia is the most common cause of cardiac issues during air travel and represents about 8 per cent of medical emergencies on board a flight. Venous thromboembolism — where a blood clot starts in a vein, such as deep vein thrombosis — is another disease that causes high numbers of cardiac issues and has garnered public attention in recent years.

Though air travel is considered safe for people in a stable condition, there are physiological changes during flight that have the potential to affect the cardiovascular system and increase the risk of complications in patients with pre-existing cardiac conditions. Prolonged immobility, decreased humidity and atmospheric pressure, gas expansion, as well as emotional and physical stress, are all factors that affect cardiovascular health during air travel.

Cabin altitude pressure is required to be less than 2.4km above sea level, otherwise extra oxygen needs to be supplied. Despite this, in an emergency or severe turbulence, the plane may have to reach higher altitudes for short periods, causing a further decrease in cabin pressure.

Vulnerable passengers such as those with underlying ischaemic heart disease and heart failure can become increasingly hypoxic and may not cope even at the standard cabin pressure, especially if combined with airways disease. Low oxygen in the blood, or hypoxaemia, can cause local vasodilation of coronary and cerebral vascular beds and vasoconstriction in pulmonary vascular beds. This increases pulmonary artery pressure as well as the heart rate, blood pressure, myocardial contractility and cardiac output, which can clearly have a negative impact on patients with pre-existing cardiovascular disease.

The low humidity (from 5 per cent to 25 per cent) does not appear to significantly increase risk, however gas trapped in a closed space will expand by about 35 per cent when going from sea level to cabin altitude. This is particularly an issue for patients who have had recent chest surgery, but mainly affects patients who are critically ill and are being transported with tubes and/or balloon pumps. These patients would be attended by medical specialists.

Venous thromboembolism occurs in approximately 5 per cent of high-risk groups on long-distance flights and occurs three times more often than in the general population on the ground. This is not only due to the prolonged immobilisation associated with travelling and the configuration of the seats, causing pressure at the back of the legs, but also due to the reduced pressure increasing hypercoagulability of blood.

Fear of air travel, anxiety about missing a flight, and the physical exertion of carrying extra luggage and rushing, increases the risk for patients with myocardial ischaemia due to elevations in blood pressure and heart rate. Arrythmias may occur more frequently during flying as well.

However, patients with unstable angina, myocardial infarction within two weeks (or a complicated myocardial infarction), coronary artery bypass grafting within 10 days or any other cardiac intervention within two days should not fly. Additionally, patients with heart failure and New York Heart classifications of III and IV will need supplementary oxygen on the flight. Patients with pacemaker devices or defibrillator devices should always carry their ID cards and hand-held metal detectors should not be held over these devices — a hand search is preferable.

Patients with recent or even historical venous thromboembolic disease should be on prophylactic medication and/or wear class 2 graduated compression stockings (not travel socks!) as per the advice of their medical practitioner. Though the overall risk remains small, venous thromboembolism associated with flying can occur up to one month after long-distance flight, though most cases are during the first week.

A separate group of patients are those with pulmonary arterial hypertension, of which there are an increasing diagnosed number. These patients have issues due to changes that occur with the pulmonary vasculature during flight. Pulmonary artery pressure often increases and depending on the particular disease process and the New York Heart Association classification, significant desaturation can occur. Supplementary oxygen is often required.

Injuries, death and deterioration of health status during aeroplane travel is legally covered in Australia by the Montreal Convention. Under Article 17 of the Convention, ‘The carrier is liable for damage sustained in case of death or bodily injury of a passenger on condition only that the accident which caused the death or injury took place on board the aircraft or in the course of the operations of embarking or disembarking’ (emphasis mine). Cardiovascular disease has generally, in several court cases, not been able to meet the definition of an ‘accident’. For example, the High Court of Australia in Povey vs Qantas Airlines Ltd concluded that deep venous thrombosis was not an accident but rather a physiological change occurring within the body of a passenger. Myocardial infarctions have also been found to not meet the definition of an accident.

Broadly speaking, therefore, it seems that the legal onus associated with developing new cardiovascular issues or exacerbating existing ones lies with the traveller, making the journey potentially perilous from not only a health but also a financial perspective!

Dr Andrea Riha is a Cardiologist with wide experience in Vascular Medicine and Cardiology. She has expertise in the treatment and prevention of deep venous thrombosis, as well as management of pulmonary embolism and vascular diseases that include leg ulcers and vasculitis. Dr Riha also has special interest in cardiac risk factor modification and women’s cardiac issues.